In this science experiment, we will learn to determine the focal Length Of the Convex Lens.

A lens comprises a transparent material bounded by two spherical surfaces of the same or different radii.
The curved surface of the lens is of two types, concave and convex. 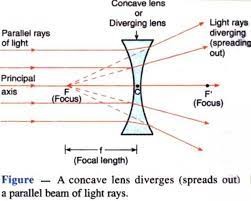 The relation between the object distance u, image distance v, and focal length is described by the formula ;

This formula is valid for both lenses (concave or convex).

To find the focal length of a convex lens by obtaining the image of a distant object.

1. The focal length of a lens is calculated by the formula 1/f = 1/v – 1/u
2. The nature and size of the image depend on the position of the object.
3. The light rays coming from a distant source, say tree, will be considered parallel light rays.
4. All the light rays will converge at the focus of the lens.
5. A real, inverted, highly diminished image will form when a screen is placed at focus.

1. Select a distant source of light, such as a tree.
2. Hold the lens with the help of a lens holder.
3. Adjust the convex lens such that light rays coming from the tree fall on its reflecting surface.
4. Obtain a well-defined image on a white screen by moving the concave mirror.
5. Now, measure the distance between the convex lens and white screen with the help of a metre scale.
6. This is the measurement of focal length.
7. Repeat this experiment by changing distant sources with different distances. 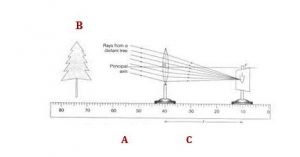 The value of focal length of convex lense = ………cm

1. Measurement should be taken accurately.
2. The distant object must be clearly located.
3. The formed image should be sharp and well-defined.
4. The Meter scale should be correctly placed between the white screen and the concave mirror.
5. The lense must be thoroughly clean.
Note:- This experiment is not helpful for concave lenses because concave lenses form virtual and erect images which can not be obtained on a white screen.

In this way, we have learned to determine the focal length of a convex lens by obtaining the image of a distant object.

Q.1 What was the aim of our experiment?
ANS. To find the focal length of a convex lens by obtaining the image of a distant object.

Q.3 What is the nature of the image formed in this experiment?
ANS. Real, inverted, and much smaller than the object.

Q.4 When does a convex lens form a diminished image?
ANS. When the object is placed between infinity and the optical centre.

Q.6 Which phenomena of the light mirror shows?
ANS. Reflection

Q.9 What is the other name for a concave lens?
ANS. Divergent lense.

Q.10 Why convex lenses are called convergent lense?
ANS. Because a convex lens converges all light rays at one point.