How To Make A Worm Composting Bin

Want to learn how to make a worm composting bin? You’ll read the steps here.

We all know that a worm composting bin can be economical and easy to maintain. It’s simple to buy one, but believe me when I say that making one for yourself is much easier. Vermicomposting can be done in various methods, as you can see. This page includes instructions for creating one form of worm composting container that may be used inside.

Worm composting uses worms to transform leftover food and other organic materials into vermicompost, also known as worm compost, which is a valuable soil amendment. Worms eat food waste, which decomposes in their bodies as they travel about. It’s important to understand that compost is ejected from the worm’s tail end. The compost can then be used to cultivate plants.

One can wonder why it’s good for plants. Remember that the worms consume nutrient-rich fruit and vegetable leftovers and turn them into nutrient-rich compost, which is why vermicompost is healthy for plants.

So, let’s make a good worm composting bin for your home. Just follow the steps and make sure you’re not making any mistakes.

If you want to make a composting bin, you’ll need these materials.

By following these simple steps, you can make it.

Step 1: Take a large bucket. Use a driller and make small holes on the base. Step 2: Now, take a bucket full of dirt and add it to the bin. After adding the dirt, add compost.

Step 3: Add cardboard waste. Make sure you’re soaking the cardboard in the water. 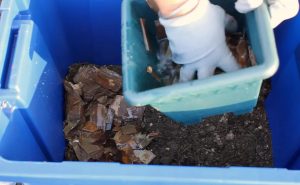 Step 5: After that, the last layer is kitchen waste. Add kitchen waste, first the paper and tissues, and then the green waste. At least add the soil with worms. 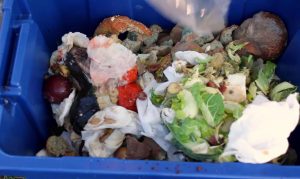 Step 6: And here’s your worm composting bin. Place it on your farm, or you can even place it inside your home.

While adding the layers, make sure that each layer is equally spread. After that, close the bin.

And that’s how you can make your bin. Hope this tutorial on how to make a worm composting bin would have helped you.