In this experiment(It’s Crystal Clear), we will be determining whether the type of water has any effect on the growth of crystals or not.

To find if the water type affects the crystal growth in it.

1. We hypothesised that the type of water does affect the growth of crystals in it.

3. Alum crystals are easy to grow using alum powder. They are colorless and transparent crystals. 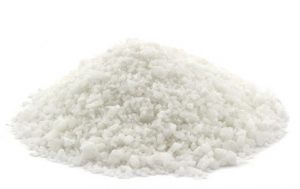 Step 1: Take a container and pour two cups of water into it.

Step 4: Leave the container for seven minutes to get cool.

Step 5: Now, take alum powder and measure 80 grams of it.

Step 6: Pour the measured 80 grams of alum into the container.

Step 7: With a spoon, stir the solution well.

Step 8: Once the alum gets completely dissolved in water, divide this into two jars with equal amounts Each jar must contain one cup of solution.

Step 9: After completing this experiment, repeat the same process with another type of water like ocean water, tap water, mineral water, and freshwater.

Step 10: After each experiment, measure the weight of crystals formed in grams. 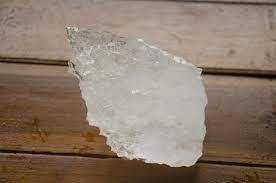 1. We have performed four trials, and we observed that in experiment 1 with string, Distilled water grows the crystal best, then comes Mineral, Fresh, Ocean, and Tap water.

2. In experiment 2 with string, Distilled was the best, then came Mineral, Fresh, Tap, and Ocean water.

3. In experiment 3, without string, Freshwater was the best for growing crystals, then came Tap, Distilled, Mineral, and Ocean water.

4. In experiment 4 without string, Freshwater was the best, then came Tap, Distilled, Mineral, and Ocean water.

1. Our hypothesis in which we assumed that the type of water does affect the growth of crystals was correct.

2. We assumed that ocean water would support most in growing crystals and freshwater would not support at all was incorrect.

2. For its growth, the crystal needed seeds. More the number of seeds, the more the crystal.

3. Ocean has almost no seeds; as a result, it does not support the growth of crystals.

4. In the experiments, 1 and 2 strings served as the seed. Therefore, distilled water outperforms other waters in growing crystals.

5. In the experiments, 3 and 4 strings were absent. Therefore, freshwater outperformed each other in terms of growing crystals as the freshwater has a moderate amount of seed in it.

6. Therefore, we concluded that freshwater would let the alum crystal grow best in it without adding any extra material.

1. Wash the utensils thoroughly before repeating the experiment.

2. Each jar must be filled with one cup of solution.

In this experiment, we determine whether the kind of water affects the crystals’ growth.

ANS. We aimed to determine if the growth of crystals gets affected by varying the kind of water.

Q.2 Which kind of water supported the growth of crystals most?

Q.3 Which kind of water did not support the growth of crystals?

ANS. Ocean water did not support the growth of crystals at all.