Most Efficient Electrolyte for Hydrogen Production through Electrolysis

In this experiment (Most Efficient Electrolyte for Hydrogen Production through Electrolysis), we will be determining among the given electrolytes like table salt, calcium chloride, baking soda, lye, and sea salt, which one will harness hydrogen more through electrolysis.

To find which electrolyte is more effective, harness hydrogen through the process of electrolysis.

1. We hypothesised that among all the electrolytes, iodised salt would harness the most amount of hydrogen.

2. The process in which electric current is passed through a solution to affect its chemical composition is termed electrolysis.

3. In electrolysis, the chemical substance can lose as well as gain electrons.

Step 2: Bring the prepared 400 ml solution of electrolytes to a 38 degrees Celsius temperature.

Step 3: Put a graphite rod into each of the 400 ml solutions of electrolytes.

Step 4: Wrap copper wire around the Graphite rod. Here, the graphite rod will act as the anode.

Step 8: To measure the amount of collected hydrogen gas, draw a line on the test tube.

Step 9: Fill the water up to that line then measure the amount of water in millimeters.

Step 10: Repeat this procedure for five for each of the electrolytes. 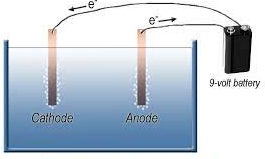 From our experiment (Most Efficient Electrolyte for Hydrogen Production through Electrolysis), we observed that

2. After this, came the iodized salt that had harnessed an average of 6.74 ml of hydrogen.

3. Sea salt harnessed on an average of 6.6 ml hydrogen.

4. Baking soda produced an average of 33.1 ml of hydrogen.

5. The one that harnessed the least amount of hydrogen was calcium chloride. It produced on average 1.8 ml of hydrogen.

3. The iodized salt is more economical than Lye as Lye is two times more expensive than iodized salt.

4. One of the biggest problems with clean hydrogen is its high cost.

5. At present, the cheapest one is gasoline, but it affects the environment negatively. Therefore, it would no longer be an option in the future.

7. The only way of obtaining the cleanest hydrogen is through electrolysis.

1. Repeat the experiment, at least five times for each electrolysis.

In this experiment, we determined the efficiency of various electrolytes in harnessing hydrogen through electrolysis.

ANS. We aimed to determine the efficiency of several electrolytes in producing clean hydrogen through electrolysis.

Q.2 Which electrolytes produced the most hydrogen?

ANS. Lye was the one that produced the most hydrogen.