In this science experiment, we will see the dependence of potential difference (V) on current (I) passing through the resistor and determine its resistance (R). And will try to plot a graph between V and I based upon the concept of Ohm’s Law.

1. A circuit is a current-carrying closed conducting loop.
2. The arrangement of devices with the help of their symbol in such a way that they represent a close loop is called a circuit diagram. 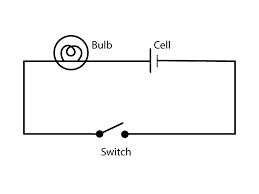 1. The charge flow through a conductor per unit time is called an electric current.
Electric Current = Charge flow/ Time.
I = Q/T.

1. The property of conducting wire to resist the flow of current in a conductor is called resistance.
2. According to ohm’s law, Potential difference = Electric Current/ Resistance.

3. Therefore, the ratio of potential difference and electric current is called resistance.
4. The SI unit of resistance is ohm or volt/ampere.
5. The resistance of a conductor depends upon the area, length and material of that conductor.
R L/A, where L= length and A = Area.
R = ρL/A, where ρ = resistivity of the conductor.

1. It is an instrument used to measure the strength of the electric current in a conductor.
2. This instrument is represented as This device is used to control current in a circuit by changing its resistance. 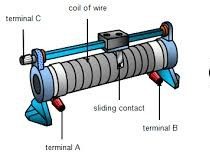 To determine the dependence of potential difference (V) across the resistor on current (I) passing through it and determine its resistance (R). And will try to plot a graph between V and I.

According to Ohm’s law, if the physical quantity, such as temperature, pressure, stress, strain, etc., is constant, the current flowing through the circuit is directly proportional to its potential difference.

Where R will be the resistance of the circuit.

We get a straight line if a graph is plotted between the current (I) and the potential difference (V). Step 1. Set up the diagram as shown in the figure.

Step 2. Note the least count of the ammeter.

Step 3. Note the least count of the voltmeter.

Step 4. Find their zero error, if any, and note it.

Step 5. Now, plug the key on the battery eliminator.

Step 6. Slide the variable of rheostat until the ammeter and voltmeter show a reading.

Step 8. Now, take out the key from the battery eliminator for a moment.

Step 10. Write all the observations in the table and find V/I for every set of observations.

Table 1; For ammeter and voltmeter

Table 2; For reading ammeter and voltmeter. 1. While observing the devices, reading errors may occur.
2. Wire may heat up due to the flow of current for a longer period of time.
3. Area of wire may not be uniform.
4. The screws may not be adequately tightened.
5. The terminals of the cell may be connected to the wrong terminal of devices.

In this experiment, we have learnt to determine the dependence of potential difference (V) across the resistor on current (I) passing through it and determine its resistance (R). And will try to plot a graph between V and I.

ANS. According to Ohm’s law, if the physical quantity, such as temperature, pressure, stress, strain, etc., are constant, the current flowing through the circuit is directly proportional to its potential difference.

Q.2 What is the formula for ohm’s law?

Q.4 Which law of electric current is verified in this experiment?

Q.5 What is the SI unit of current?

Q.6 What is the SI unit of resistance?

Q.7 Why should we not allow the current to flow for a longer period of time?

ANS. Because according to the formula (H = I^28R), the wire will heat up and lead up to maximum resistance.

Q.8 Resistance of wire depends on what conditions?

Q.9 What is the composition of nichrome wire?

Q.10 Why is it advised to take out the key when observations are not being taken?

ANS. To avoid the excessive heating of the wire.