In this science experiment, we will learn the relationship between the weight of a body and the force required just to move it.

You must have studied friction in your previous classes, although below are the main points about friction for a quick revision to understand the experiment quickly.
Here, N= Normal force
F= Contact force
f= force of friction 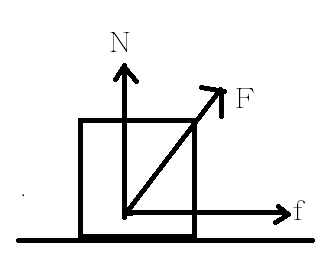 1. Friction is the force exerted between two bodies kept in contact. Whatever we do in our daily lives involves friction—for example, walking on a road, writing your notes, riding a bicycle or pulling/pushing an almirah.
f = μN
Where μ is the coefficient of friction
N is the normal

2. Friction obeys Newton’s third law.
3. According to Newton’s third law, every action has an equal and opposite reaction, i.e. if a body A exerts a force F on another body B, then B will exert a force -F on A.
4. This force can operate between a pair of solids, between a couple of liquids and between a solid or liquid.

This force of friction acts between two bodies kept in contact but do not slip on each other. For example, when someone is trying to push a heavy truck. The maximum force applied to a car does not make it move due to its heaviness, and this maximum force is called limiting friction. The coefficient of this friction is denoted with μs.

This force of friction acts between two different moving bodies kept in contact. For example, riding a bicycle. The coefficient of this friction is denoted with μk.

1. The direction of kinetic friction acting on a body is opposite to the body in motion with respect to the body applying the force of friction.

2. If the bodies slip over each other, the force of friction between them will be
fk  =  μk.N

3. If the bodies do not slip over each other, the force of friction between them will be
fs  ≤  μs.N

Aim of The Experiment

To set up a relationship between the weight of a wooden block lying on a horizontal table and the maximum force required to move it using a spring balance.

Step 1: Clean the table on which you are going to perform this experiment.
Step 2: Place the wooden block on it.
Step 3: Take the spring balance. Note its least count and zero error.
Step 4: Tie one end of the thread with the hook of the wooden block and the other end of it to spring through a thread.
Step 5: Place this whole thing in such a way that one end of the table holds a wooden block, and the other end holds spring balance.

1. Plot a graph between normal reaction along the X-axis and reading of spring balance along the Y-axis.

2. You will receive a straight line graph. It is observed that when the weight on wooden pieces increases, the normal force also increases. Thus the graph shows that the maximum force required to move the rectangular block is directly proportional to the mass of the rectangular piece.

In this article, we have learnt the relationship between the weight of a body and the force required just to move it.

Q.1 What is the SI unit of friction?

Q.2 Why do wooden blocks not move on the first go?

Ans. Due to friction and the minimum applied force.

Q.3 Why do wooden blocks start dating after a specific amount of force is applied to them?

Q.5 Why is it suggested to clean tables before experimenting?

Ans. Because dust increases the friction.

Question 1: In which direction does the force of friction act on the block?

Answer: The force of friction acts in the opposite direction to the direction of the block’s motion.

Question 2: Why thread is pulled horizontally?

Answer: In order to find the friction force, we have to slide the body horizontally on the surface; therefore, it is pulled horizontally.

Question 3: How does oil or grease affect the limiting friction of objects?

Answer: Oil or grease makes the surface smooth which reduces the friction force between objects.

Question 4: How is the concept of limiting friction used to measure a force?

Answer: A body does not move until the force crosses the limiting friction line. Limiting friction can be measured when an object starts moving suddenly after applying a certain amount of force.