In this experiment, we will be testing the Stellar Parallax theory using a series of observations on a football field. It is a method to measure the relative distance of stars.

To test the Stellar Parallax theory.

1. The apparent shift in the position of a nearby star or any other object against the background of a distant object is called the stellar parallax. 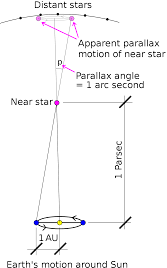 Step 1: Set up a board with grids on it.

Step 3: Stand at a position that is one hundred meters away from the grids.

Step 4: With the help of a telescope, record the observation of the points which are two meters apart.

Step 5: Observation will be taken in two sets.

Step 6: First, record the observation at night using a digital camera and a laptop.

Step 7: Second, record the observation in the daytime by hand on graph paper.

1. The observations which we took at night were indecisive because of the image quality.

2. The observations which we have taken during the daytime were accurate, and we can determine which set of data was closer and can depict the relative movement in arcseconds.

1. Astronomers use this theory to measure the relative distance of stars.

2. The apparent change in the position of the nearby object relative to the distant object when an observer changes its position is called parallax.

3. While measuring the relative distance of two stars, astronomers use the opposite side of earth’s orbit as an observation point.

4. Using this land-based experiment, we have proved that the concept used by astronomers to depict the distance of stars is correct.

In this way, we have proved that this theory is accurate for measuring the relative distance of stars by constructing an entirely land-based experiment.

ANS. To determine whether the stellar parallax is accurate.

Q.2 What do you understand about the term stellar parallax?

ANS. The apparent shift in the position of a nearby star or any other object against the background of a distant object is called the stellar parallax.

Q.3 What is the other name for stellar parallax?

Q.4 Name the astronomer who has discovered the stellar parallax?

ANS. This method was given by the astronomer Friedrich Wilhelm Bessel.

Q.5 How does parallax arises?

ANS. The change in the viewpoint of the observer because of the movement causes the parallax.

Q.7 How do astronomers measure the stellar parallax?

ANS. While measuring the relative distance of two stars, astronomers use the opposite side of earth orbit as an observation point.

ANS. The formula for stellar parallax is d = 1/p,

Where d is parsecs and p is parallax angle, measured in arc-second.

Q.9 How many light years are there in one parsec?

Q.10 What is the result of your experiment?

ANS. We find that the stellar parallax theory is accurate for measuring the relative distance of stars by constructing an entirely land-based experiment.