Verify the Laws of Reflection of Sound | Science Experiment

In this Science Experiment, we will see how we can verify the laws of reflection of sound.

First of all, we should know what sound is. Let us take a quick review of it.

1. We hear different types of voices in our daily lives, whether living or nonliving. These voices are called sounds.
2. The material in which sounds travel is called medium.
3. Medium can be solid, liquid or gas.
4. Sound is produced when vibrating objects hit each other in the medium.
5. In sound, one form of energy is converted into another form of energy. For example, clapping of hands- in this, the kinetic energy turns into sound energy.

1. Wave is a disturbance produced in a medium when one particle in motion sets its neighbouring particle into motion.
2. Particles do not move from one point to another; instead, they create a disturbance. And this is what happens in sound.
3. Therefore, sound can also be imagined as a wave.
4. Sound wave is a longitudinal wave, i.e. the particles move along the direction of propagation of disturbance.

Note: Particles do not move from one point to another. They just set neighbouring particles in motion while oscillating in their mean position.

Characteristics of A Sound Wave

1. Compression: It is the area where particles are crowded. The density and pressure in this area are high. The upper portion is called the crest.
2. Rarefaction: This is the area where particles are separated from each other. The density, as well as pressure in this region, is low. The lower portion is called the trough.
3. Wavelength: It represents the distance between two troughs and two crests. It is denoted by the Greek letter ⋋.
4. Frequency: It is the number of oscillations per unit time represented by v.
5. Time period: It is the time taken to complete one revolution in the medium.
6. Amplitude: The softness and hardness are determined by amplitude. It is the distance moved by an object in the medium.
7. Pitch: Pitch depends on frequency, i.e. faster the vibration of sound in a medium, the greater will be the frequency and the higher will be the pitch.
8. Speed: It is the distance travel in compression or refraction per unit time.

Speed of Sound in Different Medium

Like light, sound also reflects after hitting a surface. It follows the same law of reflection i.e.

1. Angle of incidence and angle of reflection with the normal is equal.
2. Incident sound, reflected sound and normal all lie in the same plane.

Aim of the Experiment

To verify the laws of reflection of sound.

When sound bounces back after hitting any surface, it is called a reflection of sound.

The laws of reflection of sounds are:-

1. Angle of incidence and angle of reflection with the normal is equal.
2. Incident sound, reflected sound and normal all lie in the same plane 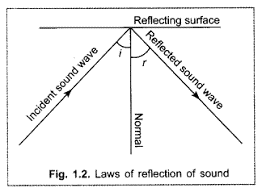 Step 1: Attach a white sheet on the drawing board with the help of drawing pins.

Step 2: Draw a line AB at the one edge of a white sheet.

Step 3: Take a point C on it and draw a normal CD through it.

Step 7: Place two pieces of cardboard making an angle of  30° with the normal. See the figure below. 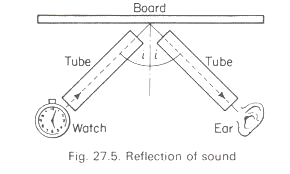 Step 8: Place a clock at the end of one of the cardboard.

Step 9: Try listening to the sound of the clock through other cardboard. When you find the position of clear sound, mark that position as point F.

Step 10: Try to hear the sound of the clock by lifting CF to a small height.

Step 12: Join the point CF and measure the <DCF, and note it.

The sound would be decreased when you uplift the end of tube CF.

From this experiment, we have seen that apart from error, the angle of incidence and the angle of reflection of sound is equal. And all the incident sound reflected sound and normal lie on the same plane.

1. Glass slab should be clean.
2. Mark the tube’s position immediately after hearing the maximum and clear sound of the clock.
3. Reflecting surface should be placed vertically.
4. Angle should be measured between cardboard and tube.
5. Glass slab, ear and stopwatch all should lie on the same plane.

In this experiment, we have learned how we can verify the laws of reflection of sound.

Q.1 Why do you hear your voice in an empty room?

Ans. Because the walls of the empty room reflect the sound produced by me.

Q.2 What is the SI unit of frequency?

Q.3 What is the time interval between original and reflected sound?

Q.4  Why it is required to use a sound source with low amplitude.

Ans. So that we could hear the sound clearly through cardboard. If we have taken a sound source of high amplitude, then we hear the sound directly in our ear.

Q.5 How can we make the sound more clear?

Ans. By painting black inside the surface of cardboard or making it rough by placing newspaper inside it.

Q.6 What happens when the same experiment is done in water?